Dodge diesel trucks took the auto world by storm with powerful, efficient Cummins engines, showcasing a vehicle with excellent performance. Ever since the late eighties, these vehicles have garnered nationwide support. You can find Dodge Diesel trucks of all generations out on the roads today — even some of the first generations are still running strong.

One of the most important aspects of Dodge Diesel trucks — and what makes them so popular — is what’s under the hood. Dodge was one of the first trucks to experiment with the Cummins engine, and it turned out to be one of the best moves they could have made.

The Cummins engine is one of the most successful diesel engines ever. Clessie Lyle Cummins, a farm boy from Indiana, invented the revered engine. Cummins was a natural engineer from the time he was young. He built his first steam engine at the age of 11.

He left the family farm when he was young and went on to support himself as a mechanic, eventually joining race car driver Ray Harroun’s pit crew in 1911. With a few suggestions to improve speed, Cummins helped Horroun place first in the first-ever Indianapolis 500.

Cummins would witness the first diesel engine in 1918, which had been imported by Hvid, the Dutch manufacturer. He acquired a license to build these engines for the American market. Cummins saw a use beyond just the agricultural functions that diesel engines played during that time — he envisioned diesel engines under the hood of vehicles.

Cummins installed one of his engines into a 1926 Packard Touring Sedan and drove cross-country using 30 gallons of fuel to travel almost 300 miles. It was amazing efficiency for the day.

Cummins continued to advertise the efficiency of his diesel engines, taking trucks and buses cross-country and entering races to show off their value.

Later, Cummins would go on to start his own company — Cummins Enterprises. Though Cummins would eventually retire, the company would go on to expand beyond his wildest dreams. Business locations expanded around the globe and diesel engines could be found in all kinds of appliances, from tractors to huge generators.

It wasn’t until the late eighties that a unique partnership would arise, leading Cummins into the truck industry. Dodge was one of the only major car companies left that hadn’t delved into the world of diesel engines, and they were quickly falling behind in innovation.

When Dodge offered a new design for their trucks that included the Cummins engine, it was a perfect match for what they were looking for. That partnership created one of the most cherished and long-lasting engines ever, providing a unique signature to the Dodge lineup and spawning many Cummins generations.

Powered by the iconic 400-pound, 160-horsepower 5.9-liter 12-valve Cummins engine, the D250 and D350 were the first Dodge diesel pickups to hit the market. These first-gen trucks are relatively lightweight and simplistic in nature with their bare-bones engine design. They also offered excellent fuel economy — around 20-25 miles per gallon.

Many mark this generation as the best Cummins year because of the simplicity of the engine. If there was an issue, many owners were able to fix it on their own. This is an advantage that other Dodge diesel models wouldn’t offer.

You can still find plenty of these old diesel Dodge trucks out on the roads or hauling weight on farms today. Although this is a beloved generation of trucks, the best year of the Dodge Cummins was still a few years away for many enthusiasts.

The next generation of Dodge diesel trucks would see an upgraded body style paired again with the sought-after 5.9-liter Cummins engine. This time it also came equipped with a Bosch P7100 mechanical injection pump. Long-lasting, economical and simplistic, the second-generation Dodge diesel echoed the first and emphasized what was working. It still stands as one of the best years for the Ram 2500. This truck continued the path of engine reliability and efficiency that was becoming central to diesel Ram trucks.

The second half of the second generation, from around 1998 to 2002, included slight changes to the design of the Dodge. Dodge installed a new 24-valve Cummins under the hood with an electrically-controlled Bosch VP44. With the right upgrades, these trucks could boast 400 to 500 horsepower. The truck also included the new 53-block engine, which would later prove to have longevity issues.

Even aside from technical issues, this generation of Dodge Rams continued to perform efficiently and reliably and proved to be great at hauling weight for long periods.

Starting in 2003, the third-generation Dodge diesel truck models introduced a whole new array of advantages for drivers. From the interior to new engine performance, there was a lot to love about this new truck:

Overall, these years marked another successful one of the Dodge Cummins generations, upgrading power and interior design. The Dodge Cummins diesel still had room for improvement, as the ensuing years would reveal.

In the second half of 2007, Dodge unveiled the new, larger 6.7 Cummins, offering upgraded horsepower and torque. With great drivability, these Ram trucks also became versatile vehicles with functions that exceeded towing — they became great commuting and family vehicles, too. The 6.7 Cummins continued to change by the year.

The 2011 and 2012 models came equipped with a new integrated exhaust brake — a critical advantage for people looking to tow weight on their truck. The ensuing years included various new trim options and upgrades in technology — keyless ignition, air suspension and new infotainment systems became available. Mobile hotspots and HD radio were introduced in 2018. These upgrades would build the foundation for the present era of Dodge Ram trucks.

Innovation continues to power the evolution of Dodge diesel trucks, providing ways to make the vehicle more useful than ever before. From its beginning as a humble partnership with Cummins, Dodge has produced some of the most iconic trucks of the last three decades.

As the Cummins continues to grow stronger and evolve throughout the years, it will be exciting to see just how much power designers will be able to get from these efficient vehicles.

Each generation of Dodge Rams are uniquely different, highlighted by their own features and engine specifications. There is a lot of information to cover, and people will often have many different questions about diesel trucks.

What Is a Cummins Engine?

Cummins is a type of diesel engine invented by Clessie Lyle Cummins. When Cummins first saw diesel engines, he immediately saw the potential and sought to bring them to the American public. Eventually, Cummins would design his very own engine under his name, which would go on to have unbridled success.

Like other types of diesel engines, the Cummins engine works through internal combustion. This combustion creates high-pressure gases which then move pistons, effectively converting chemical energy into mechanical energy.

Along with appliances used in oil drilling and industrial mining, Cummins engines are also found in Dodge trucks. Their efficiency, performance and longevity make these engines sought-after.

Which Ram Trucks Are Diesel?

Diesel trucks are common all the way through the Ram lineup, meaning you’ll be able to find a diesel version in just about every trim. Whether you’re looking for a performance-boosted Ram 2500 or the more elegant 1500, you’ll still be able to experience the efficiency benefits of the diesel engine.

What Are the Benefits of Diesel?

If you’re thinking about buying a truck, you might be wondering whether you should opt for a gas or diesel engine. Here are a few advantages of diesel:

There are many benefits to diesel engines, particularly for those who value powerful, efficient engines that will last a long time. 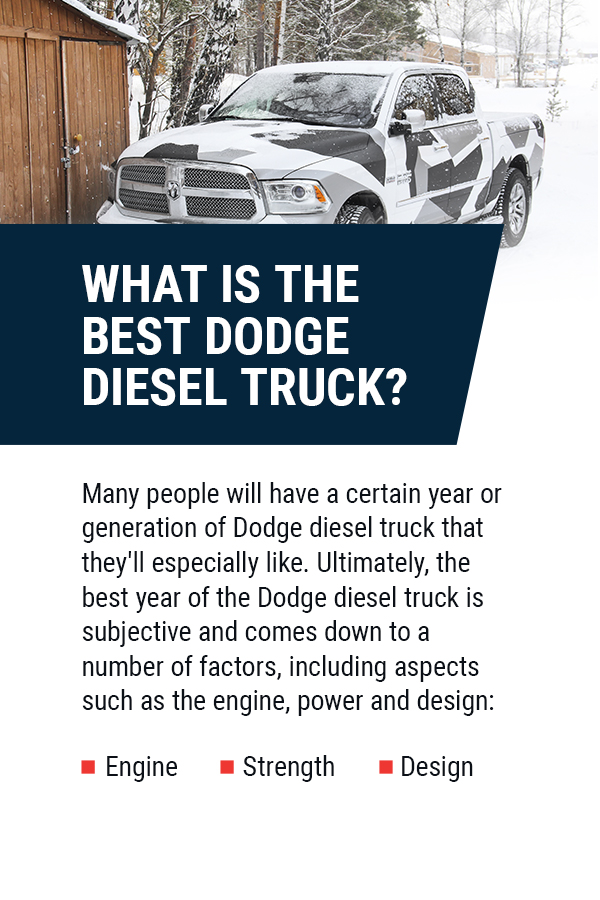 What Is the Best Dodge Diesel Truck?

Many people will have a certain year or generation of Dodge diesel truck that they’ll especially like. Ultimately, the best year of the Dodge diesel truck is subjective and comes down to a number of factors, including aspects such as the engine, power and design:

Drivers were able to easily identify the issues in their engines and make fixes, while later generations became more complex. Some engines were also more durable than others. Someone’s favorite engine will largely depend on what they prioritize in their vehicle.

One of the main reasons people buy Dodge trucks is because of their towing capabilities. The efficient, torque-producing Cummins engines allow drivers to tow great capacities with relative ease. As the trucks evolved over time, designers were able to produce more torque with more powerful engines. Those who favor that kind of performance may opt for the Dodge Rams with the rawest strength.

Aside from the engine and tow strength, other truck owners might look at the overall design of the truck to determine which is best. The 2003-2007 Dodge trucks, for example, came with a quieter ride and expanded cab space.

The best year of the Dodge Cummins is up to you. Whether you favor the engine specs, towing strength or the overall design of your truck, you get to decide which truck is best for you. You may even have gotten your hands on the best Ram diesel truck. If you bought a newer version or found a classic Ram from decades ago, you may be looking to improve it. One of the most important aspects of repairing or restoring a truck is to find quality parts to assist you in the project.

Raybuck Auto Body Parts offers a vast selection of parts that range from upholstery to engines. Whether you’re looking for a comprehensive restoration project or a simple repair, Ray Buck Auto Body Parts can offer you what you need. When you shop with us, you’ll experience many advantages over other companies, including:

With all of these advantages, it’s clear why Raybuck Auto Body Parts is the trusted company you’re looking for.

When you’re looking for a place to find all of your trucking restoration needs, Ray Buck Auto Body Parts is the store for you. We have parts spanning many Dodge Ram diesel models and years. Mirrors, fuel tanks, flooring and weatherstripping are just some of the quality parts we offer in our store.

Shop our online collection and get in touch with us for more information.

One response to “Dodge Diesel Trucks”