If you own or hope to own a Beetle from the 1970s and want to invest in the correct restoration parts, it helps to know the difference between the Beetle and the Super Beetle. Volkswagen offered both models throughout the 1970s, with both subtle and major differences between them.

Many people can’t tell them apart at a glance, so it’s important to know some of the primary ways you can determine if you’re looking at a standard Beetle or Super Beetle. Learn more about how to tell if you have a Super Beetle by reviewing the vehicles’ histories and their primary differences.

History of the VW Beetle and the Super Beetle

Volkswagen released the VW Beetle in 1938, and the car evolved significantly after that, with changes made to alter the vehicle’s performance and appearance. Volkswagen kept the VW Beetle in production until the 1980s and later released new versions in the 1990s and 2000s. Standard VW Beetles were largely defined by their iconic look, compact design and affordability.

The Super Beetle was only on the market for less than a decade. Volkswagen first offered the Super Beetle in 1971, with the vehicle staying in production until 1979.

During the 1970s, many different compact car manufacturers began to step up their competition with the VW Beetle. These other compact vehicles gave buyers a more comfortable experience. Customers chose other cars over the Beetle due to the standard version’s cramped design.

Since VW wanted to bring drivers back to their flagship compact car, they created the Super Beetle to address the main complaints drivers had about the standard model. This upgraded Beetle came with a few new features and a larger design to increase passengers’ comfort. When they released it in 1971, Volkswagen called it a “1302”. Later, in 1973, they released a new Super Beetle called the “1303.”

While the VW Beetle’s production began in 1938, they were still in production in the 1970s during the Super Beetle’s run. As a result, some collectors may not know how to tell Beetles from the 1970s apart. Some people will simply tell you that Super Beetles are larger than standard Beetles. But there are several other differences between them to help identify what kind of Beetle you’re looking at.

To know how to tell the difference between regular VW Beetles and Super Beetles or to decide which one is right for you, review some of their primary differences:

Another difference between the Beetle and the Super Beetle relates to the vehicle’s drive quality, which is the most apparent change. Since the Super Beetle needed to be more comfortable to drive, it featured some mechanical upgrades, primarily a new front suspension.

Instead of using the standard Beetle’s torsion bar, the Super Beetle came with a MacPherson strut front suspension assembly. This change gave the Super Beetle a greater turning radius and improved its driving quality.

When you drive both vehicles, the difference between the standard Beetle versus the Super Beetle’s handling is clear. The Super Beetle’s steering is much more responsive, and the overall ride is smoother.

In the first couple of Super Beetle years, it had the same windshield and roofline design as the standard Beetle. In 1973, VW added a flatter roofline and curved windshield to the Super Beetle.

These changes were intended to differentiate the models. But the flatter roofline and more curved windshield are barely visible when you look at the Super Beetle. You’ll have to look close to tell the models apart based on these characteristics alone.

While some VW Beetle owners think they can easily swap parts between models, the Super Beetle and standard Beetle have unique requirements. Know how to tell the two Beetles models apart when you need to purchase restoration parts for your vehicle. 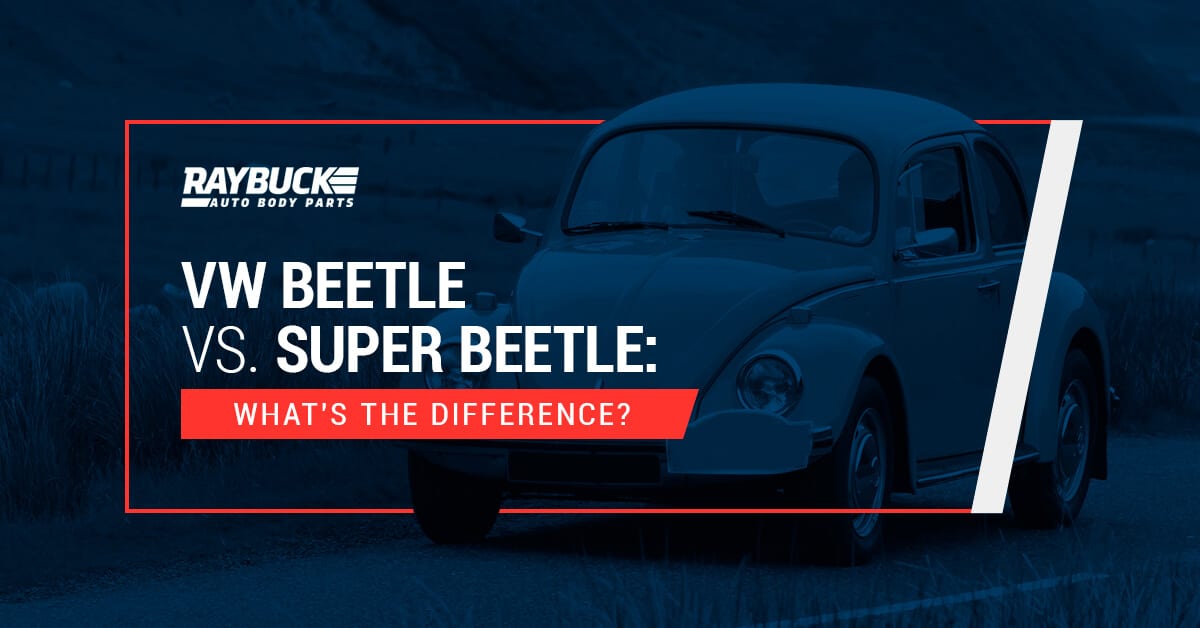 Whatever Beetle you own, we have restoration parts and panels ready to restore it. The VW Beetle is an iconic piece of automotive history, and any parts you use to restore it should be the best. We ensure the Beetle parts we offer meet standards for excellence, helping you get the most from your VW Beetle and keep it looking its best.

Browse our many restoration parts designed for Beetles. If you have any questions, contact us today.

7 responses to “VW Beetle vs. Super Beetle: What’s the Difference?”